Over Labor Day weekend, I traveled to NYC for a long weekend to visit Bridgette and Rob. One of the absolute highlights was going to THE US OPEN!!!! I am trying to not overuse exclamation points and writing in all caps in this post, but I think my face in the picture above says it all. I was so unbelievably excited to be there!!!We procured tickets months ago on the day they went on sale, and I’m so happy we grabbed grounds passes for the first Saturday evening of play. 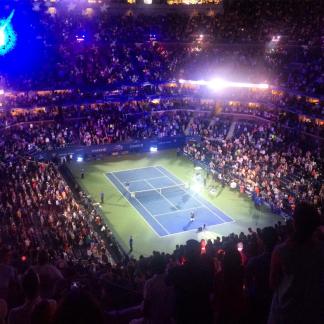 Bridgette and I grew up as avid tennis players, and I started playing when I was five years old. We both played almost daily from then through high school, and tennis has long been my very favorite sport! Bridgette and I grew up playing on various tennis teams, competing and traveling, and we were even doubles partners for two years in high school! (Sistah Scholl) I’m not much of an athlete when it comes to other sports, but I was (and still am, sorta!) quite good at tennis. And I love it so much!! Every year, year after year, we’ve watched the French Open, Wimbledon, and US Open (sorry, Australian Open, I always forget about you!), and it used to be a dream of mine to play at Wimbledon. I think it’s safe to say the time has passed for me to be a Wimbledon champion, but that’s okay! It was, however, still a dream to go to the Grand Slam tournaments, and I’m so glad that this year I finally made that dream a reality. Wimbledon and the French Open, I’m still working on getting to see you in person, too! 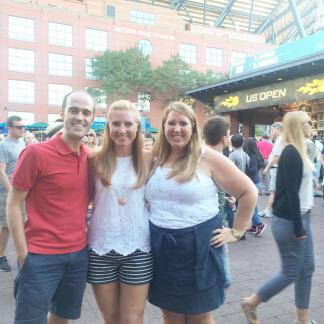 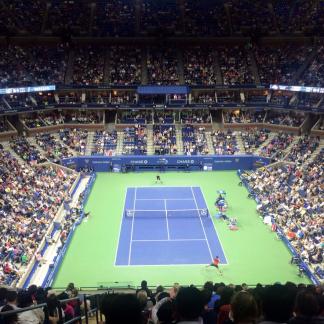 Needless to say, I was like a child on Christmas morning over Labor Day weekend when it was finally time to go out to Flushing Meadows to see the US Open in person! I apologized to Rob about by extreme giddiness that day, but I think he was pretty excited, too. Despite a little miscommunication with the policy of when we could actually enter the gates (some people told us the wrong info…), we were more than thrilled when we could finally enter the grounds at the US Open on Saturday evening!!! We didn’t have as much time to explore and wander and soak it all in as I would have liked, but we learned our lesson for next time (yes, there will be a next time, and that time we’ll know: Saturday grounds pass + Saturday evening ticketed seats).

And boy was it amazing!!! Really, I had so many ‘pinch me’ moments! There was great food and drinks, excited people everywhere, huge screens of some great matches that stretched on, and I loved being surrounded by so many people who love tennis and all of these athletes as much as I do! The grounds and the stadium are really beautiful, and there’s so much to see and do. I loved seeing the huge globe that’s quintessential to the US Open, we found some cute Nike apparel and branded t-shirts to take home, and we were even on TV! Yes! We were right behind Chris Evert (THE Chris Evert) as she aired live at the US Open, and my parents definitely saw us on TV (and recorded it!).

Inside Arthur Ashe stadium, the biggest stadium, we were able to see an evening women’s match and a men’s match. The highlight was watching Andy Murray play!!! I’ve loved Andy for years, and it was surreal watching him play in person. And he won! We were pretty high up, but we still could see so well. I was impressed with the size of the stadium (and it’s so pretty!), the views that we had, and just how electrifying it was to be there. I don’t think a giddy grin left my face the whole time!

I’m so, so happy the three of us were able to go to the US Open this year, and it was an incredible day, for sure. I already am plotting to come back again next year. It was amazing seeing something in real life that you’ve followed along on TV with for over two decades, and I loved being able to share that day with Bridgette and Rob!!